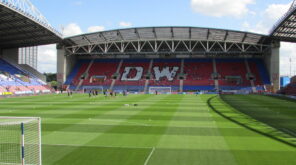 Businesses across a wide variety of sectors are facing real financial trouble due to the lockdown restrictions related to the COVID-19 pandemic.  A lot of these companies were hit with an initial period where, almost overnight, their ability to trade and generate income was greatly reduced.

When it came to football, which is now a major financial industry in the UK that employs many thousands of people, there have been significant impacts. The FA, the Premier League and the EFL postponed all football matches for a few months and have now allowed a certain amount of matches to return without any crowds present, which could be the situation for the foreseeable future. Football clubs across the Premier League and EFL now have a very uncertain future with regards to fixtures, gate receipts, match day revenue, TV income and sponsorship.

Wigan are the latest in a long line of cases

It was announced on 1st July that Wigan Athletic had become the first English football club of the COVID-19 era to require a formal insolvency process, entering into Administration.

This is becoming an all too common issue for North West football fans, with Wigan’s plight following that of Bury FC, who were removed from the football league earlier this season after a failed CVA. Bolton Wanderers were another team who experienced the Administration process, their process being in May 2019.

Bolton have subsequently been relegated to the lowest division in the EFL for the upcoming 20/21 season. Eight years ago they were in the Premier League. Another tale of woe in the North West is that of Macclesfield Town, who in December 2019 were deducted six points by the EFL after failing to complete a fixture against Crewe Alexandra.

Their inability to play the game was due to players and staff being unwilling to take part after they failed to receive their wages. These problems aren’t unique to North West clubs however, with Southend United failing to pay staff wages and receiving a Winding Up Petition for unpaid HMRC liabilities in January of this year.

Outside the Premier League, the numbers don’t add up

The Premier League is the most cash rich and commercially funded football league in the world, but take even one step beneath it to the Championship and it quickly becomes apparent that the numbers simply don’t add up, even before the additional burdens added by COVID-19.

The Championship demonstrates a business model that would seem crazy in almost any other industry. Football club owners gamble their clubs’ financial future to be one of the three teams – out of a league of 24 – who make it to the Premier League.

While that may work out great for the three clubs who make it to the ‘promised land’ it’s a perilous model for the other 21 clubs. Take the 2017/18 season, where the combined wages of all 24 clubs in the Championship came in at £795m; this spend on wages alone exceeded the total combined revenue of the 24 clubs, reported at £750m.  In simple terms, when wages are greater than total income – before accounting for other costs – clubs lose millions each season.

Wolverhampton Wanderers, who were promoted in the 2017/18 season, posted an operating loss of £57m and pre-tax loss of around £49m.  Thankfully – for them – Wolves are owned by Fosun International, with their Chinese owner prepared to fund those losses for a time.

Not many of the clubs in the Championship are in that position, and whilst Financial Fair Play guidelines were introduced during the 2010/11 season with the aim of limiting the wages to turnover ratio, salaries have continued to rise at an almost exponential rate, become a major financial risk, especially when a team starts to struggle on the pitch.  Any business that pays out more on staff wages than it generates in turnover is clearly not sustainable for long.

The case of Wigan Athletic

In terms of Wigan Athletic’s particular story, the club was only last month sold to its current owners, an Asian consortium called Next Leader Fund. The rapid step towards insolvency has many in the football world questioning how thorough the due diligence was before the club was purchased. It appears, on the surface, that once they became more fully aware of the club’s financial state, the new owners simply couldn’t – or wouldn’t – fund any more ongoing losses.

While the timing was a surprise, this is not an entirely unexpected for the club, with Wigan’s former Chairman, David Sharpe, telling the BBC late last year that “the Championship is a bubble waiting to burst” given the financial risks many clubs take to reach the Premier League.

Despite the current Wigan squad registering the fourth lowest wage bill in the Championship, Sharpe, who also said “the Championship is not financially sustainable and can’t continue if the model is just having enough billionaire owners to keep funding it”, recently revealed that he and his family were having to inject “just under £1m per month to keep the club going”.

The Administrators of Wigan Athletic are now faced with the tricky task of seeking to continue to trading and allow Wigan to fulfil the remaining fixtures of their Championship season, while at the same time looking for any interested buyers. They will attempt to complete a sale of the club in order to protect the jobs of as many staff as possible, although it is looking likely that many support staff will be made redundant.

With the league stating that a 12-point deduction will be imposed – barring a possible appeal by the club – even Wigan’s excellent recent results is unlikely to be enough to save them if they lose 12 points. Were they to be relegated back to League One, the considerably reduced income in a lower league is likely to make the club an even less attractive proposition to potential buyers.

It remains to be seen exactly what will happen with Wigan Athletic, but the wider question that begs to be asked is, should the FA and the EFL given even more consideration to the financial model of many clubs outside the Premier League. Could this include looking at implementing further financial measures, potentially a ‘salary cap’ ruling, in order to help protect clubs from further financial chaos and the dreaded company liquidation that would spell the end of clubs which mean so much to their communities and wide fanbase?